During last week’s episode of WWE Monday Night Raw, we as an audience were reminded just how absolutely lost the writers behind the scenes of the show truly are. During the first of two segments allowed to the women wrestlers…..I mean superstars……no wait I mean Divas, we saw the announcers acknowledge the incredible match from last week’s NXT: TAKEOVER RESPECT between Sasha Banks and Bayley.

There was a video package and even some nice quotes from respected press outlets showing just how important this moment was for women and the wrestling industry as a whole. Of course, this whole pomp and circumstance was shown in the background of yet another Nikki Bella vs Naomi match while Sasha Banks stayed on the outside of the ring being treated as just another interchangeable face in the Diva’s division.

The whole segment wasn’t a completely negative one though. As I mentioned there was that video package and the announcers did take some time to acknowledge Sasha’s achievement on NXT and they even played up the crowd chanting “we want Sasha” as part of the storyline to assuringly cause animosity between Team B.A.D. members Naomi, Tamina and Sasha but the problem was despite all that acknowledgment, nothing has changed for the women of the WWE on Monday night. Week in and week out we watch an interchangeable member of a three woman team face off against another interchangeable member of another three woman team.

The entire reason fans love the women of NXT is that while they were on NXT they were able to develop personalities and tell great stories. Sadly, on Monday nights they are treated as a group of beautiful females who fight each other. Nothing more. Nothing Less.

Sure, the term “Diva’s revolution” keeps getting thrown around and the announcers can try to play up nonexistent storylines all they want but in all honesty, fans who only watch on Monday nights have no reason to care about the ladies of the “Diva’s” division. If you are only watching Monday nights, the hype surrounding women’s wrestling and the “Divas revolution” probably doesn’t even make sense because there’s nothing happening on Mondays that supports a revolution or even anything slightly exciting for that matter.

I fully understand that despite my personal love for Sasha Banks and my devotion to tuning into NXT every week, most casual fans simply don’t watch NXT and probably don’t really understand how good Sasha and some of the other women from NXT truly are. The WWE Network boasts around 1 Million subscribers but even that doesn’t mean every one of those people actually watch NXT and when you look at the tens of millions of fans around the world you start to realize that despite how damn good the performers of NXT are, casual fans most likely don’t really understand that and when performers like Sasha are moved to Raw they need to have their talents showcased for the new larger audience, instead of being thrown into the background assuming everyone knows what they can do.

In the past, if superstars had a phenomenal match that absolutely “brought the house down” there would usually be a moment on Raw where the performers would come out and accept some praise from the crowd as a sign of respect. In Sasha Banks’ case, she got the video package and a slight acknowledgement in the overall “Bella” storyline but other than that, nothing special. Some would argue the fact that her even getting acknowledged should be enough but I’d argue it’s not. Sasha Banks and the ladies of NXT are not just some fad or flavor of the month, these women are the real deal and something we haven’t seen in a very long time.

In the case of Sasha Banks I’d say we are at the early moments of what could be a Hall of Fame career as she has the talent, personality and look that should skyrocket her to the top of the wrestling world and keep her there for a very, very long time. Unfortunately, on Monday nights, we as an audience are only told how good Sasha and the rest of the NXT women are and are rarely given the opportunity to them perform their craft.

How can a massive, live TV audience learn to appreciate just how good she is at being “The Boss” when she rarely as a mic in her hand now or even gets a 1 on 1 storyline for that matter? Sasha thrives when she has an opponent and a story she can sink her teeth into and unfortunately the storyline of “female team members are jealous of each other” (the same storyline that Team PCB is also currently performing by the way) just doesn’t do it. I have no doubt in my mind that if there’s a way for Sasha to make this jealously storyline work then she will absolutely knock it out of the park but the fact of the matter is she deserves better than this. In fact, all the Women of the WWE deserve better than this…..and so do we as fans. 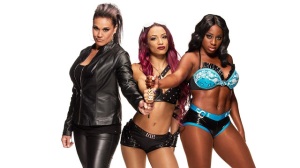 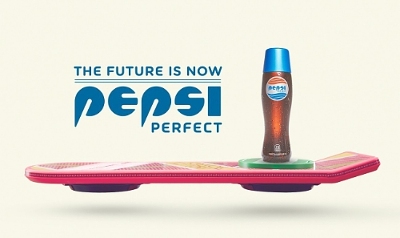 I don’t know about the rest of you, but in my eyes 2015 has been a pretty depressing year so far. Back in 1989, as an impressionable 9 year old I had my world expanded by BACK TO THE FUTURE II as I spent an entire school year discussing the realities of what 2015 would be like and how I had a friend, who had a friend, who knew a guy, who said he met someone, who owned a working hoverboard. It was an exciting time to be a kid with an imagination but as we have fast forwarded 26 years and are now smack in the middle of the 2015 that BTTF II promised, the world we have is nothing like the fantastical dream we all grew up with.

Yes, we have cool computers and phones that can do things we didn’t even imagine possible back then but as far promises the film gave us goes, we are severely lacking. There’s still no hover boards or hover conversions for cars, Nike still hasn’t perfected self lacing shoes, Im still waiting for holographic JAWS, I cant hydrate a pizza, my jacket doesn’t dry itself, weather is still hard to predict, all lawyers haven’t been abolished and we are all still waiting to see if the Chicago Cubs live up to their 2015 destiny.

It kind of sucks to see how many fun things from the film never really came to be and how more companies didn’t really embrace the nerdy celebration that many of us hoped October 2015 would really be but thanks to Pepsi, one of those cool futuristic promises is actually here. Pepsi Perfect, the drink Doc Brown sends Marty into the Cafe 80’s to buy with a crisp $50 bill is actually being released. While not as easy to grab as it was for Marty in the film, fans can actually get their hands on the collectible through an online sale for the price of $20.15. There will also be some limited chances for fans to grab a bottle at NYCC this weekend as pepsi will have a special booth on display to celebrate the product and Back To The Future II.

You can read the full press release below and check out the promotional video as well which should warm the heart of any BTTF fan.

Surprising Back to the Future fans everywhere, Pepsi officially confirms the long-awaited creation of Pepsi Perfect – the famous soda Marty McFly orders in the second installment of one of the most beloved trilogies in motion-picture history. The fantastical cola, made famous by the film, will officially be available on October 21, 2015, paying homage to the date Marty McFly travels to in the future. Since 1989, Back To The Future enthusiasts have waited patiently to see how the future unfolds.

“Pepsi fans asked and we heard them loud and clear,” said Lou Arbetter, Senior Director of Marketing, PepsiCo. “The Back to the Future trilogy was as big a moment in pop culture history then as it is now, 30 years later. We are excited to be part of this moment and to bring fans something only Pepsi could deliver – and there’s no need to wait – the future is now!”

If our calculations are correct, Pepsi will make the future a reality on October 21, 2015 and unlock limited quantities of Pepsi Perfect, available for purchase online while supplies last. Fans located in the U.S. can get their hands on 1 of 6,500 Pepsi Perfect bottles, each outfitted in a special collectible case. The 16.9 oz. bottles will contain Pepsi Made with Real Sugar and will sell for $20.15.

While the clock counts down to October 21, New York Comic Con ticketholders will step into a Pepsi Perfect world as they enter the Javits Center on Thursday, October 8. From sponsoring a Back to the Future focused panel to creating a Café 80’s inspired booth featuring a DeLorean and Wild Gunman arcade game, Pepsi Perfect will bring to life the magical world created by Back to the Future Part II.

Marty Mornings: Each day, the first 200 fans who come to the Pepsi Perfect Booth (#CP101) dressed as Marty McFly will take home their very own Pepsi Perfect.

•McFly outfits must contain the following:

◦Puffy red vest or Back to the Future Part II jacket

Quick Draw Wild Gunman Style: Every day starting at 3PM, fans are invited to come to the Pepsi Perfect booth and play Wild Gunman for a chance to win Pepsi Perfect. Bottles will be awarded to the fastest gunman in town, so start practicing.

“New York Comic Con is the ultimate fan destination and the first place for exclusive entertainment experiences,” said Lance Fensterman, senior global vice president for ReedPOP, producers of New York Comic Con. “We’re honored to join Pepsi Perfect in this special Back to the Future moment; we just hope that it doesn’t upset the space-time continuum.”

For more information on the making and availability of Pepsi Perfect visit www.Pepsi.com and follow the conversation on social using #PepsiPerfect.

New York Comic Con will be livestreaming from the NYCC Show Floor and Panel rooms all weekend long. The NYCC Livestream will feature celebrity interviews, video gaming, live art, television and movie panels, comic book previews and more. Tune in at NewYorkComicCon.com/NYCCLive for the hottest programming direct from NYC. For the most up to date information about NYCC visit New York Comic Con’s social media pages (Facebook, Twitter and Instagram).

I was able to check out Brandblack’s newest products this past week and they definitely have some cool things happening including a sneak peek at Jamal Crawford’s next shoe. Hit the link and check out all the coverage…